Workflows for data integrating into the infrastructure

To achieve the goal of a central infrastructure for data, NanoCommons created a concept and corresponding tools and workflows to collects, integrates and enhances data from a variety of providers and disseminates it to a variety of interested stakeholders in a manner that is FAIR (Findable, Accessible, Interoperable and Reusable). The main idea is that data is only stored once in a public database / data warehouse optimised for this kind of data and it is then accessible via a common interface. 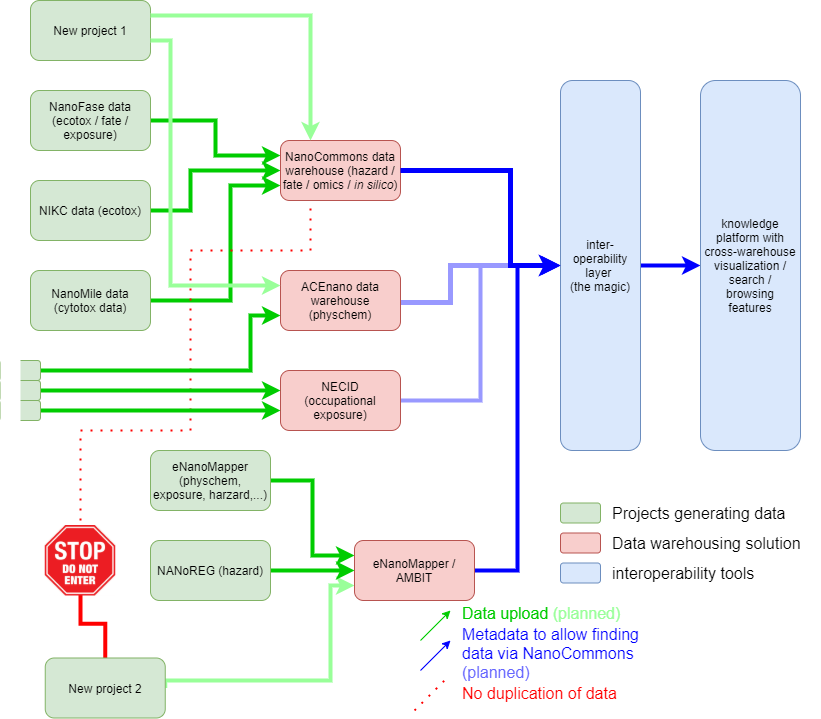 NanoCommons concept for a central data infrastruture: The data coming from different projects or individuals (green) are stored in one of the existing public and FAIR data warehouses including the Nanocommons Data Warehouse (red). The metadata describing the datasets are then harmonised int the interoperability layer and can be accessed under the common interface, the NanoCommons Knowledge Base (blue).

This is achieved by two possible routes depending on whether or not the data is already in a public database:

Combined, these two approaches are designed to reach a core goal of NanoCommons to support the European nanosafety community and NanoSafety Cluster (NSC) with making the large volumes of data generated over the last 10 years, as well as the datasets currently being generated in ongoing projects, accessible to the public. Due to variety of data types and the existing fragmentation of nanosafety data and spread over a variety of databases using different database concepts and models, clearly defined and easy to implement, but still flexible, workflows are needed to facilitate the integration of these existing databases and/or datasets into the KB. At the same time, ensuring the quality of the datasets, their completeness, and their harmonised utilisation of ontologies, such that similar nanomaterials (NMs) and measurement end-points can be queried successfully is also essential. Details on these workflows are available separately for the data warehouse integration in the NanoCommons KB and for individual dataset upload to the NanoCommons DW.